Over 600 rockets were fired into civilian cities and towns in Southern Israel from Gaza over the weekend of May 4th, 2019.  As is usual, the limited response by Israel, to specifically only target the launch sites and known terrorist facilities, was met with Jew hatred around the world.

The American media never fails to portray Israel as the aggressor.  They constantly use headlines and stories that appear to make Israel the evil tormentor of a peaceful people (so-called “Palestinians”) even when the facts clearly show the opposite.

Here is some recent proof that the American media spread their hatred of the Jews by their constant lies, indoctrination against Israel, and the anti-Jewish propaganda they spread:

Israeli strikes in Gaza kill 25, including pregnant women and children, before ceasefire – Think Progress May 6, 2019.

Israel and Gaza militants agree to cease-fire after weekend of violence – Washington Post May 6, 2019

Israeli fire kills four Palestinians, says Gaza health ministry : Three teenage boys among dead and more than 40 others shot as up to 40,000 protest along Israeli border – The Guardian – update Mar 30, 2019

The facts clearly show that over 600 rockets were fired from civilian buildings, schools, and populated areas into Israeli schools, markets, and neighborhoods with a two-fold purpose.

There are four reasons that decent human beings need to stand for Israel and condemn the attacks against that nation; Humanitarian, Historical, Logical, and if you so choose, Religious reasons.  Here they are.

Israel does not target women and children.  Hamas does.  Israel isn’t targeting children – it is a deliberate ploy by Hamas as evidenced below.

Video showing Hamas gathering children around mortar tubes as they fire into Israel.

It turns out that HAMAS killed the pregnant woman and the 14 month old girl as admitted by the Gaza News Agency.

Hamas has staged fake “protests” for peace at the border.  Then they had Hamas agents open fire and attack Israel from the crowds.  Israel fought back.  They then used the dead bodies as “proof” that Israel targeted “innocent civilians”.  From a Hamas leader’s own mouth, “50 of the 62 dead were Hamas agents”.  Watch the video and read about it here.

Hamas admits to using child labor that has resulted in at least 160 dead children to build terror tunnels to attack Israel from.

“Hamas Prime Minister Ismail Haniyeh on Thursday announced the opening of a Gaza-based military academy that will train schoolchildren to violently target the Jewish state. Haniyeh said that the new academy would prepare children as young as 12 for the establishment of a Palestinian state “from the river to the sea.” The announcement came as more than 3,000 Palestinian teenagers graduated from Hamas’s first high school military program. Hamas has been criticized in the past for using child soldiers and human shields, which in the context of the group’s battles with Israel are often reported by international media outlets as underage civilian casualties.” – TheTower.org

Hamas admits they deliberately employ women and children hoping for their deaths, because it helps their “cause”:

“Hamas leaders have long acknowledged this tactic. Fathi Hammad, a Hamas Member of the Palestinian Legislative Council, stated as far back as 2008:

“For the Palestinian people, death has become an industry, at which women excel, and so do all the people living on this land. The elderly excel at this, and so do the mujahideen and the children. This is why they have formed human shields of the women, the children, the elderly, and the mujahideen, in order to challenge the Zionist bombing machine. It is as if they were saying to the Zionist enemy: ‘we desire death like you desire life.’” – Newsmax May 16, 2018

For those who are not aware; Israel’s policy is to provide free healthcare to people living in the Gaza strip and to take care of any injured terrorists. The healthcare received is far better than they can get in Gaza and in return, many of them turn around and attack Israel after being nursed back to health.

The hard truth of the matter is that war sucks. War is the last resort when all diplomacy has failed. When terrorists hide behind children and use them as shields for their evil acts, the only way to stop them and protect your children is to fire into the groups of innocents to kill the evil ones. When this happens, it is a terrible tragedy but ALL the fault lies on the heads of the terrorists, NOT on Israel.

After the attack this weekend Israel responded with this:

Many of the targeted sites had been intentionally embedded and concealed in densely populated civilian areas; these terror groups use their own civilians to shield their terror infrastructure.

This was the only proper response and Israel aught to be saluted for doing the right thing.

Ancient Israel has been verified archaeologically as having existed from roughly 900 BC to 722 BC (and the southern Kingdom of Judah survived until 586 BC. Later, Israel existed again until the Roman occupation and destruction of Jerusalem in the 1st Century.

Before 1948 Jews were trying to purchase land from the nomadic tribes in the area. Usually they purchased dry, arid land at very high prices. Research the Peel Commission by Great Britain and you will see that it was mostly unwanted land and the Jews were being taken advantage of because they wanted to live in their old homeland.

After the Holocaust, the United Nations was formed and they agreed to give back a portion of Israel’s ancient lands so that the Jewish people would have a safe haven to go to. The world agreed and in 1948 the state of Israel was recognized again. This is a map of the land they officially owned in 1948, after the 6 day war, and what they freely gave back to get peace from the nations that attacked them.

This excerpt was found in an online forum and I couldn’t have said it better myself.

“The land was uninhabited wasteland. The powers that be, at the time (yeah, like anything has changed) were intensely anti-semitic. They wanted the “jew problem” solved so they gathered those people up and shoved them on what amounts to a reservation.

Through hard work, determination and not a little help from the United States, the jews turned that wasteland into prime real estate. It was only after the jews worked the land that arabs showed any interest at all in living there. Many arabs immigrated to Israel and were welcomed and given full citizenship.

As it became plain that Israel was to become a major power in the middle east, their Islamic neighbors decided to exterminate them. In an incredible betrayel, the arab citizens of Israel fled, hoping to take jewish land and possessions after they were all murdered. The jews kicked the asses of the combine muslim armies and pushed into the surrounding area as a DMZ. They offered to return those lands in exchange for a peace treaty and were refused. That refusal continues to this day and technically, Israel is in a state of war with its neighbors. An interesting side note is that Egypt finally DID make peace with Israel. It’s leader at the time, Sadot, was murdered for it. That tells you something about where the muslims are coming from.

There are only a handful (like a couple hundred) of the old Israeli arabs left outside Israel. Most have died of old age. So, how come there are millions of arabs in Gaza and the West Bank? Because they have steadily been filtering down there from Jordan and other countries, for no other reason than to make war on Israel. In an incredible act of gall, they claim right of return.

This is the current state of the world. The green is the Muslim countries that think Israel doesn’t have a right to exist. The red is Israel. Why is there even a dispute over their land?

“Israel exists; it has a right to exist in peace behind secure and defensible borders; and it has a right to demand of its neighbors that they recognize those facts. I have personally followed and supported Israel’s heroic struggle for survival, ever since the founding of the State of Israel 34 years ago. In the pre-1967 borders Israel was barely 10 miles wide at its narrowest point. The bulk of Israel’s population lived within artillery range of hostile Arab armies. I am not about to ask Israel to live that way again.”
– Ronald Reagan (Speech on United States Policy for Peace in the Middle East, September 1, 1982)

The simple fact is that Israel has a right to defend themselves and considering the anti-Semitism of the world, we have an obligation logically, historically, religiously, and as a humanitarian matter to protect Israel. 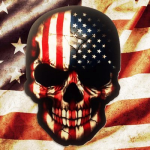 1 thought on “In Defense of Israel”